Dossier: Why we need local action to solve our environmental problems

UK100 explain why local authorities are best placed to deal with environmental issues.

Local authorities across the country have shown bold leadership by setting Net Zero targets that are decades ahead of national legislation, but sustained delivery can only happen if government gives up powers and finance.

Councils have a crucial role in tackling climate change and improving air quality, as conveners and designers of place, with influence on local planning, transport, waste and housing . Local leaders are rooted in their communities and understand local needs and opportunities. This puts them in a unique position to deliver a place-based transition to Net Zero that engages and coordinates with local businesses, public institutions and residents and brings jobs and industries to their communities. Local authorities can have a strong influence on emissions, research shows that a third of all UK emissions depend on sectors influenced by local government policies or partnerships.

“Many of the urgent changes and decisions needed have a strong local dimension. Decarbonizing buildings, transport, waste and industry, reducing emissions from agriculture and storing more carbon through land use and forestry depends on local delivery” – Lord Deben, Commission on Climate Change

There is a growing consensus, even after COP26, that global statements must be backed by local delivery. The Climate Change Commission sees action by local authorities as key to achieving our climate goals, as local leaders have a key role in introducing the measures people need to make low-carbon choices , such as the construction of cycle paths and bus lanes and the increase in the number of bus routes and services to allow a good choice when traveling.

An Ipsos Mori poll commissioned by UK100 found that 40% of people believe their local council is best placed to tackle climate change in their area, with 30% believing it is the government’s responsibility and 19% believing that it’s up to the individual. 1 62% of respondents believe there is a need for increased investment to enable safe walking and cycling, and 76% believe the transition to a green economy provides opportunities for people who have lost their jobs cause of the pandemic.2 Climate change and air pollution have many social and economic benefits for local communities. Renovating social housing reduces fuel poverty, cleaner air improves people’s health and improving public transport networks increases the mobility of people without access to a car, improving access to work, friends and family. family.

The solutions to tackle climate change are largely the same as those required to improve air quality, including the transition from petrol and diesel cars to electric vehicles, public transport, walking and cycling . Analysis by DEFRA’s Air Quality Panel found that achieving net zero emissions would likely result in a significant improvement in air quality.

Local authorities have a legal obligation to improve the health of their local population and air pollution is a public health emergency requiring urgent action. Toxic air is linked to one in nineteen deaths in the UK, including the deaths of children like Ella Adoo-Kissi-Debrah. Research has shown that air pollution can damage every organ in our body, including increasing the risk of heart and lung disease, diabetes and dementia, as well as having negative impacts on children’s development, including reduced cognition and impaired birth of babies. lungs.

The latest IPCC report highlights that unless the global community halves its emissions by 2030 and reaches net zero emissions by 2050, we will experience increasingly extreme heat waves and droughts. , flooding due to sea level rise, extreme rainfall and severe crop failure. Climate impacts are already being felt by communities across the UK, with floods last year damaging more than 1,000 properties. Local authorities should consider both climate mitigation and adaptation measures to respond to escalating climate impacts. 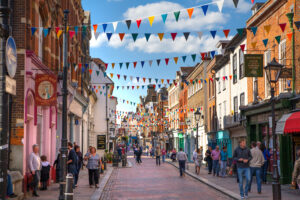 CBI research shows that if the UK met the air quality guidelines set by the World Health Organization (WHO), the economy could benefit by £1.6 billion a year in reducing premature death, sickness absence and reduced productivity due to air pollution.

Additionally, research has shown that investing in local climate action could create over 800,000 green jobs across the UK by 2030, rising to 1.38 million jobs by 2050. On average, 12.7 jobs are created for every £1 million invested in sustainable transport. infrastructure – more than twelve times the average number of jobs created by investing the same amount in road construction projects.

Action by local authorities to encourage the use of public and active transport also reduces congestion, which has significant economic benefits. A bus carrying 48 passengers at 30mph requires 35m of road to maintain a safe distance from the vehicle in front, while the same passengers in individual cars require 1.4km of road. In contrast, road expansion to reduce traffic congestion has been shown to fail to induce demand – by increasing the net distance traveled by car. Redirecting local government spending from road expansion to improving public and active transportation reduces the need for more road space, improves air quality and reduces emissions.

While the rational case may be advanced, public policy often comes up against the cold, invigorating shower of human emotion. Overcoming our instinctual personal attachment to our cars and changing our ingrained behaviors will require the boldest policy, smart delivery and a solid understanding of human behavior. A “build it and they will come” mentality has had limited effects and has not been supported by evidence.

Members of UK100, a network of local government leaders committed to improving air quality and reaching Net Zero by 2045 or earlier, are taking ambitious action. Camden Council has adopted the WHO Air Quality Standards and has designed an Air Quality Action Plan to achieve these goals by holding discussions with residents, institutions public and local businesses. The council’s Clean Air for Camden campaign provides resources for residents on what they can do to improve the air quality around their homes, workplaces and schools.

York City Council recently introduced a clean air zone, resulting in the replacement of all diesel and petrol buses operating in the city center with electric or low-emission models, made possible by the DfT grant application and DEFRA. The introduction of an Ultra Low Emissions Zone in London has cut roadside nitrogen dioxide pollution by a third and cut carbon emissions by encouraging a switch to active and public transport. Oxford City Council is working with Oxfordshire County Council to implement a zero emission zone on a number of its streets.

The UK100 network offers its members the opportunity to share best practice with other local authorities on climate and air quality policy and have a collective voice to voice shared challenges and proposals to the UK government. To find out more or to join the network, email [email protected] or visit the UK100 website.

COP27 to highlight the importance of integrating environmental issues into education programs: Min.

The long-term effects that short-term loans can cause