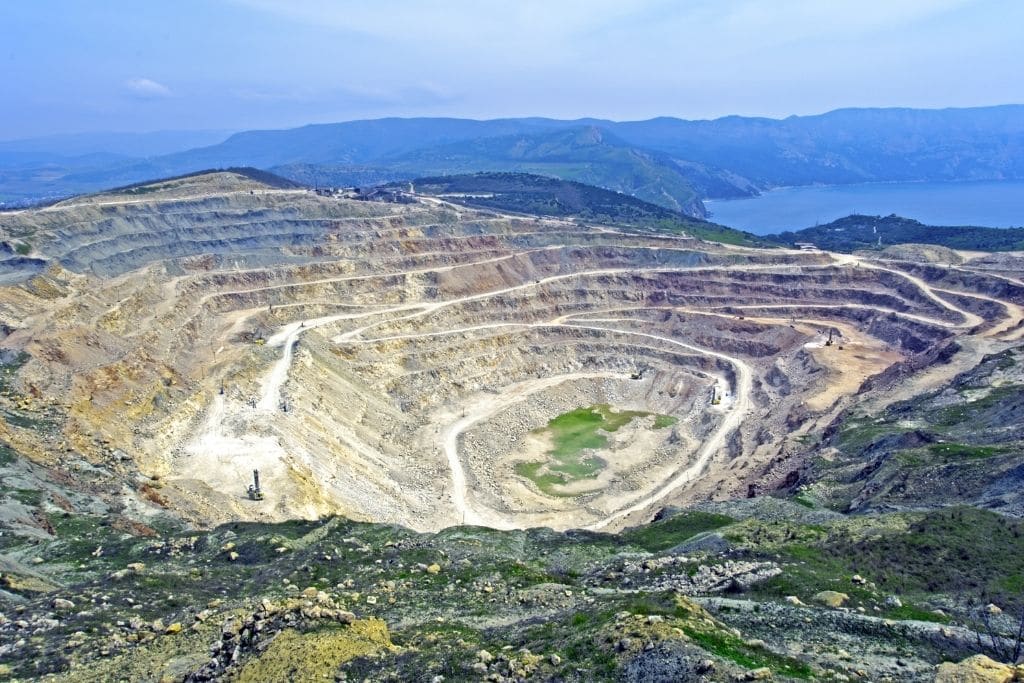 In a world dominated by consumerism where the majority of products are not recycled, mining remains essential to provide resources for economies to grow and improve living standards. However, does this cause us to dig ourselves into a growing hole of environmental problems? We look at the biggest environmental problems caused by mining.

Extracting and processing minerals provides us with the building blocks needed to form much of the infrastructure needed to sustain modern societies. In 2020, the top 40 mining companies had together accumulated a total revenue of $544 billion, an increase of 4% compared to the previous year. While the demand for some resources such as coal is decreasing, other resources such as copper are seeing increasing demand as new products and technologies require different materials. For example, a single electric vehicle lithium-ion battery (a type known as NMC111) uses approximately 16 kg of lithium, 46 kg of nickel, 46 kg of cobalt and 43 kg of manganese.

Chart showing the annual revenue accumulated by the top 40 mining companies from the extraction of different materials. Source: PwC

However, the mining process remains intense and invasive, and operations often leave great environmental impacts on the local environment as well as wider implications for the environmental health of the planet.

Water use in mining

Mineral mining and processing operations often have a high water footprint, as many steps require the use of water. Examples include dust mitigation, soluble particulate removal, screening and separation processes, and the creation of tailings dams for waste management. While some steps, like mineral separation, can reuse and recycle water, other steps like spraying to remove airborne dust will pollute the water, preventing it from being recycled. High water consumption in mining operations can reduce local people’s access to uncontaminated fresh water sources and can lead to water stress in a local area.

However, compared to other industries, mining has relatively low water consumption and often much of the water used is saline, so it is not used much in other industries or at the National level. For example, the United States has one of the highest mineral production rates in the world after China and Australia; however, water used for mining accounts for only about 1% of total national water use, with 47% of this water being poor quality salt water. 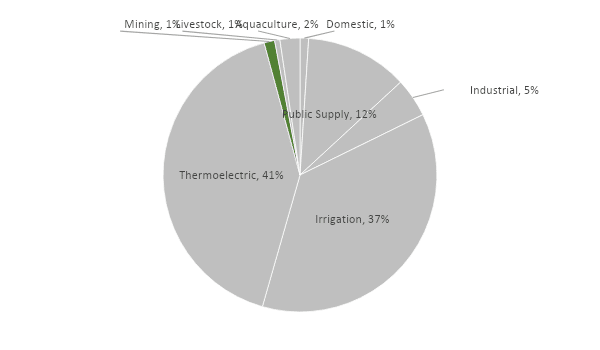 Graph showing the water consumption of different sectors in the United States in 2015. Source: USGS

There have been numerous documented cases of environmental pollution caused by mining operations, which are often caused by leaking mine tailings. Tailings are the materials left after the extraction of the fraction of economically valuable material. These materials are often stored in large tailings dams to prevent environmental damage, as the tailings are often radioactive, toxic or acidic. Tailings consist of valuable substances used in the extraction process such as cyanide, mercury or arsenic; therefore, modern mining programs often aim to remove these harmful but valuable chemicals to reuse them for further mineral separation. In addition to improving efficiency and reducing costs, this minimizes the risk of environmental damage by reducing the toxicity of tailings.

Thanks to strict international regulations, the pollution caused by mining has been considerably reduced; however, it is still a persistent problem in many developing countries where small-scale illegal operations known as “artisanal mining” occur. These low-tech subsistence mining operations are often dangerous and poor site management results in environmental pollution in the area. Artisanal mining issues remain complex as it is difficult to identify and close down all these small operations. Furthermore, although artisanal mining can lead to dangerous pollution of the environment, it helps to mitigate the 40 million the people who participate in this poverty industry. 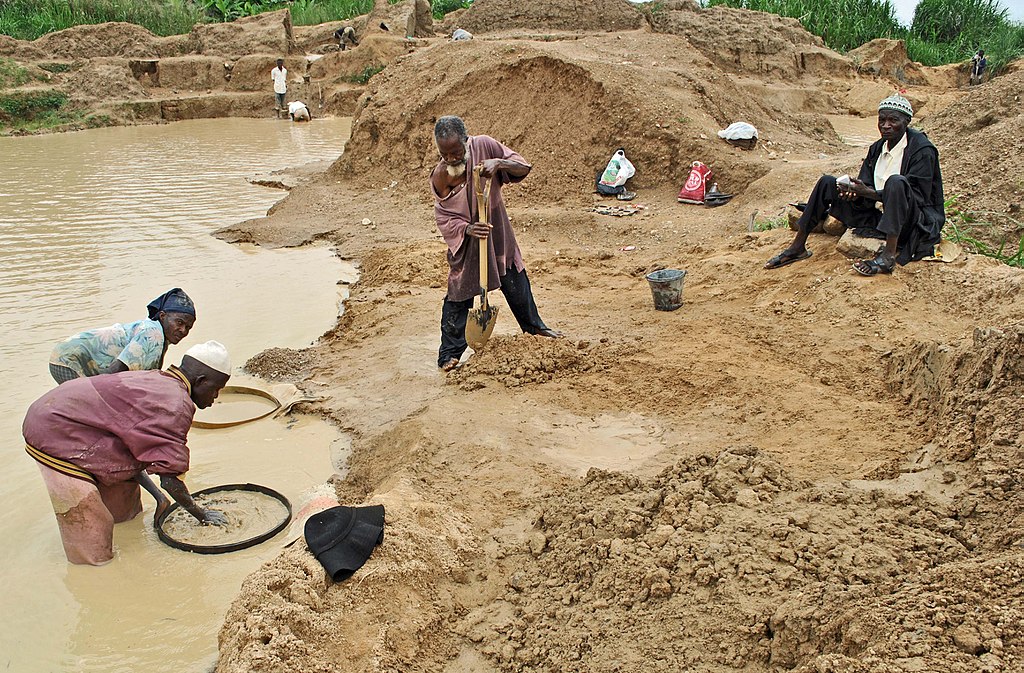 What is the impact of mining on the earth?

Another key environmental issue associated with mining projects is the change in land use that occurs, not only from the drilling and excavation of surface mines, but also changes that occur as a result of development. surrounding infrastructure. These may include camps to house the miners as well as the railways and roads needed to transport the mined materials. The infrastructure created by mining operations in remote and undisturbed landscapes can improve access to these regions, which can lead to further human-caused disturbances in local ecological systems. 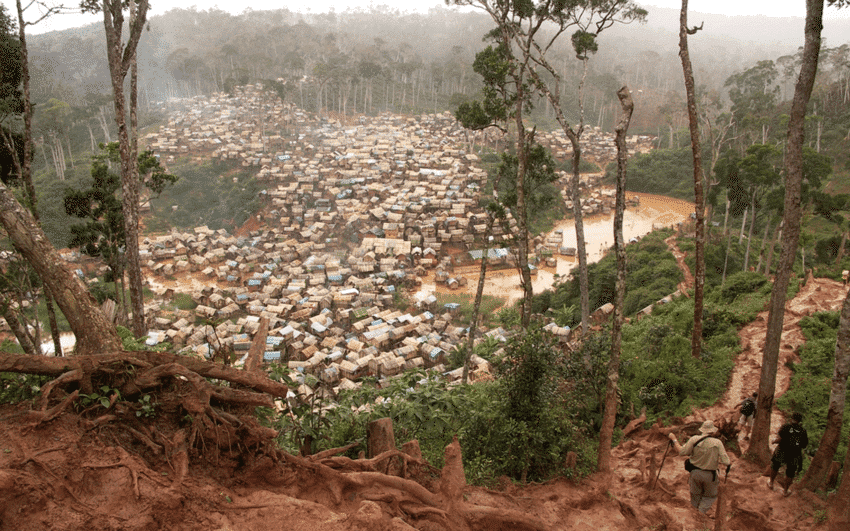 A village has been created to support 15,000 miners working in the ruby ​​mine near Ambatondrazaka, Madagascar. Source: Pardieu et al. (2017).

However, compared to many other industries such as agriculture, mining uses relatively small pockets of land, and the future of mining may shift to using techniques that are arguably even less invasive to the environment by using less land and emitting less pollution. Methods could include underground mining where ore is extracted below the surface with little waste and minimal ecological scarring of the Earth’s surface; phytomining where plants accumulate high concentrations of metals which can then be transformed; or even asteroid mining where materials from asteroids could be harvested for use on Earth.

It is also important to consider the impact of land use change in the context of greenhouse gas emissions. The destruction of vegetation and soil during land clearing for mining results in the release of carbon dioxide and other greenhouse gases. Another important consideration is the amount of greenhouse gases emitted per unit mass of material mined, as some less concentrated mineral deposits require proportionally higher energy consumption. For example, the extraction of one kilogram of diamond produces approximately 800,000 kg CO2and compared to one kilogram of a very abundant mineral such as iron which produces only about 2 kg of CO2and.

Creating products from mined materials uses large amounts of energy throughout the various stages of the production chain and most of this energy currently comes from burning fossil fuels.

Diagram showing the life cycle of a product made from mined resources where each step contributes to the total carbon footprint of the product.

Reducing reliance on fossil fuels in the mining process by electrifying the technology and running it on a green power grid is a key goal to allow mining to continue on a more sustainable path. Automating many stages of mining is also another vital change that will not only improve safety, but also increase efficiency and reduce energy costs. However, it will remain difficult to quickly transition the mining industry to a net zero emitter, and with the shortage of many rare earth metals, it is crucial to reuse and recycle mined materials wherever possible.

Overall, when considering the environmental ramifications of mining, it is important to weigh the social and environmental harms caused by the extraction of the minerals against the benefits derived from the use of the end product. . As consumers, it is important for us to be aware that our personal decisions to purchase new products containing finished mining materials are associated with high water consumption, land use, pollution and pollution. emission of greenhouse gases.

The extraction of additional resources is necessary to support the growing world population and to enable the creation of green infrastructure and the production of renewable energy. It is essential that governments and companies continue to innovate to create clean mining technologies with strict environmental regulations that will allow the mining industry to lead the way to a sustainable and hopeful future.