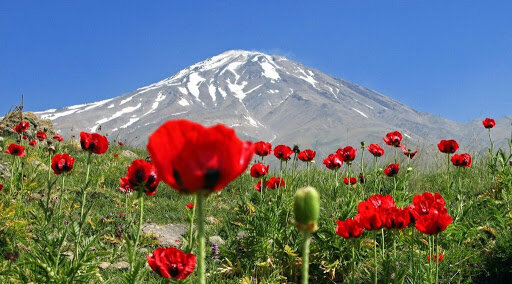 TEHRAN – Mount Damavand, Iran’s highest peak, is located northeast of Tehran, but today it faces many environmental issues and challenges.

Environmental enthusiasts believe that with the inclusion of Damavand National Day in the country’s official calendar, more attention should be paid to this unique natural phenomenon, while unfortunately no action has been taken until ‘now.

Mount Damavand, a potentially active volcano 5600m above sea level, is a stratovolcano which is the highest peak in Iran and the highest volcano in Asia, which is an important mountain in Persian mythology and folklore; it is the symbol of Iranian resistance against despotism and foreign domination in Persian poetry and literature.

It lies in the middle of the Alborz Range, near the southern coast of the Caspian Sea, in Amol County, Mazandaran Province, 66 kilometers (41 miles) northeast of the city of Tehran.

Mount Damavand is the twelfth most important peak in the world and the second in Asia after Mount Everest. It is part of the Volcanic Seven Summits mountaineering challenge.

The peak has been plagued by many environmental issues in recent years, including road construction, high tourist traffic, poor mining, overgrazing of livestock in the pastures around the slopes of the peak, exhaustion of the Dasht- e Shaghayegh (Iranian Poppy Plain) by tourists, land use changes and construction.

Excessive climbing, dumping indestructible waste to heights where it is almost impossible for non-professional people to pick it up and clean it up, lack of sanitation services, legal and illegal hunting, overpopulation of sheepdogs resulting in the death of species wilderness, as well as the destruction of ancient artifacts in the region, are among the problems, if not addressed, could pose a serious threat to this natural heritage.

Mountains are home to 15 percent of the world’s population and a quarter of the world’s land animals and plants, in addition to providing fresh water to half of humanity, their conservation is therefore a key factor for sustainable development. .

Because all kinds of precious metals and stones, coal and other raw materials are hidden in the heart of the mountains, they have always been encroached by humans; also because of the agricultural land which is used for the production of fodder, herbs, animal husbandry, meat production, dairy products and all kinds of food.

Unfortunately, the mountains are threatened by climate change and overexploitation, and Damavand is no exception.

Formation of a special task force to protect Damavand needed

â€œThis year, environmental activists are celebrating Damavand National Day for the 16th year (of course the ceremony is expected to be held online this year due to the coronavirus outbreak). During this time, they acquired a good experience in the defense of the environment of Damavand.

Also, for more than 15 years, militants from Tehran and Mazandaran have been going for several weeks on the slopes of Damavand peak to guard the Shaghayegh plain.

However, environmental activists have not yet succeeded in properly sensitizing local populations to the effects of the destruction of natural spaces around their homes. Therefore, the participation of the inhabitants in the defense of Mount Damavand must be taken seriously, â€he explained.

Although the DOE registered the upper part of the summit as a natural monument a few years ago, it has so far taken no protective measures for the 2,500m height.

In addition, since 2008, Damavand has been listed nationally as the first natural and historical monument by the Ministry of Cultural Heritage, but has not conducted any protection program as it should.

To solve the problems of Mount Damavand, there is no choice but to bring together government agencies, non-governmental organizations and residents to cooperate; therefore, it is suggested that a working group be formed with the presence of people and various organizations interested in the preservation of Damavand, responsible bodies such as the DOE, the Organization for the management of forests, rangelands and watersheds, and the Ministry of Cultural Heritage, Tourism, and Crafts, he explained.

This working group can prepare instructions which must be implemented by all; for example, relevant agencies will provide facilities, funds and expertise to help identify problems in the region, and NGOs, as a line of communication between government and residents, will organize training courses and promote promotion of culture among the population, he noted.

In this working group, the inhabitants will be responsible for protecting Damavand; once environmental protection becomes a culture for the people of the region, the destruction will no longer continue but will be minimized, he added.

The first program of the Damavand National Day, which was held from June 22 to 24, 2004 with the cooperation of the Tehran Climbing Board, mountaineering enthusiasts, mountaineering groups and the media, was accompanied hundreds of climbers to symbolically collect waste in Damavand. Mountainous area.

And every year a special program has been carried out on the occasion of this day, in the meantime, those responsible should seriously consider protecting Damavand, so that it is no longer subject to deliberate and unintentional destruction.