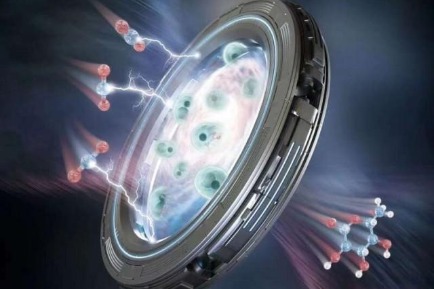 Chinese scientists have created an efficient way to synthesize carbon dioxide into energy-rich long carbon chain compounds like sugar and fatty acids, according to a study published Thursday in the journal Nature Catalysis.

Experts said the technology could turn a common greenhouse gas emission into a valuable commodity, which could present a new way to tackle environmental problems and achieve a sustainable economy.

The method consists of a hybrid electro-biosystem, combining the electrolysis of carbon dioxide – the process of passing electric current through a substance to effect a chemical change – and the fermentation of yeast. The system efficiently converted the greenhouse gas into glucose or fatty acids, according to the study.

Zeng Jie, one of the study’s corresponding authors and a professor at the University of Science and Technology of China, said the progress is essentially trying to convert carbon dioxide into acetic acid, which is the main component of vinegar. and an excellent source of biosynthetic carbon. .

Moreover, the acetate produced by conventional electrocatalytic devices is always mixed with other by-products, which cannot be directly used for biological fermentation. To address these challenges, the researchers developed special equipment that can separate and purify the solution, and which has the potential for practical large-scale use.

“The acetic acid coming out of our device is very pure and concentrated, which can be directly consumed by yeast as a raw material to produce glucose,” said Xia Chuan, a professor at the University of Electronic Science and Technology of China.

“This demonstration is a starting point for realizing light-reaction-free artificial synthesis of important organics from CO2,” said Yu Tao, a professor at the Shenzhen Institute of Advanced Technology of the Chinese Academy of Sciences. science.

Ezekwesili, Monsur and others advocate technological and sustainable solutions to environmental problems