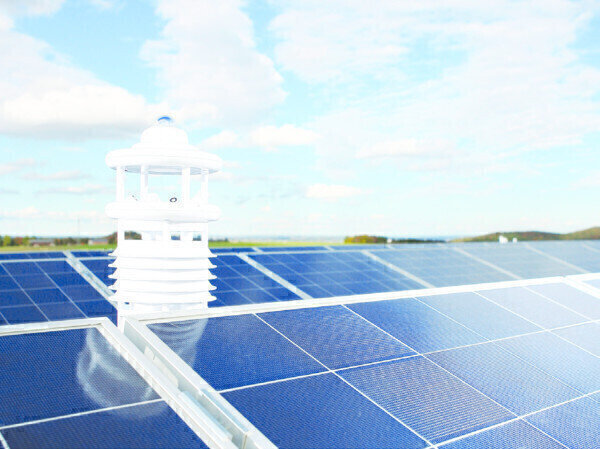 Global cooperation with system partners requires a wide variety of variants and different interfaces. Lufft environmental sensors, whether fixed or mobile, can be integrated via many different protocols into new or existing applications. Thanks to the low energy consumption, the use of the compact weather sensor family WS from Lufft is quite possible in the field of solar evaluation as well as monitoring. Here, in particular, the low installation and assembly effort is appreciated.

But how did Lufft start to evolve sensors for the solar industry?

In the early 1990s, Lufft used radiation sensors from Haenni, Switzerland, to integrate the first automatic weather stations. The â€œSolar 130â€ silicon radiation sensor was the first to be used for weather sensors. This specimen served as the predecessor of Lufft’s silicon pyranometer. In the meantime, Haenni halted production of solar radiation sensors and Lufft began working with Kipp & Zonen sensors, the world’s leading manufacturer of pyranometers.

The family of weather sensors has grown and consists of a wide range of all-in-one solutions tailored to different customer needs. Four of the 18 WS versions include a pyranometer with different quality levels: WS301, WS501 and WS503 include a second class CMP3 thermopile pyranometer from Kipp & Zonen, WS310 and WS510, which was introduced this year, are equipped with a secondary pyranometer Kipp & Zonen’s CMP10 standard and the WS304, WS502, WS504 and WS700-UMB measure solar radiation using Lufft’s own silicon solution which was developed on the basis of the Haenni sensor. The silicon radiation sensor has an accuracy of 5%, while the CMP10 (WS510-UMB) is accurate to 0.2%, and the CMP3 sensor (WS501-UMB) has an accuracy of 1.5%. Kipp & Zonen pyranometers are WMO compliant and cover all levels of international classification (second class, first class and secondary standard). Therefore, the WS510 and WS310 are ideally suited for large scale PV power plants, both for solar assessment and site monitoring tasks. Renowned references for WS all in one devices are Meteocontrol, Siemens, Solar-Log and EKO, SMA. The special feature of these sensors is the multifunctionality. They include not only the pyranometer but also many other probes. Therefore, the WS510-UMB, for example, offers the possibility of measuring temperature, relative humidity, atmospheric pressure, wind direction as well as wind speed in addition to solar radiation. The fact that only one cable is needed for data and power connection saves operators a lot of installation and maintenance effort.

In particular, the new WS510-UMB has been designed for large-scale solar power plants. It is not only equipped with a secondary standard Kipp & Zonen pyranometer, but also for the first time brings together a variety of individual weather sensors in one all-in-one device. However, only one cable is needed for power and data transfer, as is the case for each member of the WS family. All of the individual sensors of the WS510-UMB present the highest possible level of quality and precision. An external sensor for the module temperature can also be connected to the weather sensor. All measured values â€‹â€‹are communicated through a single digital interface and adjustable data logs to the data logger or SCADA system.

In the monitoring of large photovoltaic installations (Utility Scale) or in the evaluation of potential sites (Solar-assessment) finally counts the maximum energy that can be generated. Of course, it depends on the locally dominant solar radiation (global radiation) in the first place. But other meteorological parameters such as air temperature, wind and precipitation influence the performance and efficiency of photovoltaic modules (Performance Ratio). The WS510-UMB also meets the requirements of the World Meteorological Organization (WMO) through active ventilation with air temperature measurement and inertia-free and maintenance-free measurement of wind speed and direction. on the principle of ultrasound. By using an external module, temperature sensors or a precipitation sensor can be connected additionally. Prior to its market introduction, the highest standard for Kipp & Zonen thermopile radiation sensors was the Second Class CMP3 Kipp & Zonen version. The WS510-UMB is like other Lufft weather sensors equipped with an RS485 interface and transmits data in various open communication protocols (eg Modbus). Thus, the implementation is very easy in surveillance systems on
the market.

In summary, the WS510-UMB is particularly convenient to install and reliable to use. It is ideal for large solar installations.

In addition, the WS600-UMB, with integrated sensors for temperature, relative humidity, atmospheric pressure, wind direction and speed as well as sensors for the intensity, type and amount of precipitation, has been installed. proved to be a preferred system for the detection of precipitation. The radar measurement principle provides information on the cleaning effects on photovoltaic modules by rain. In turn, this efficiency can be enhanced, controlled and explained. In addition, it checks whether the performance is influenced by the layers of snow.

But other WS â€œfamily membersâ€ have a lot to offer as well. â€œEven the quality of the Lufft silicon sensor cell proved to be quite persistent over the long term, which has been proven by several tests,â€ explained Axel Schmitz-HÃ¼bsch, head of development at Lufft. â€œThe silicon pyranometer is suitable for solar power plants, the result of which is more decisive than the yield (input-output ratio of solar irradiance). These are plants located in price sensitive markets such as India or Africa, â€adds Udo KronmÃ¼ller, sales manager for wind and weather.

For Lufft, the United States and America in general has proven to be an attractive sales area for solar related products. There, awareness and demand for reliable sources of renewable energy is increasing. Thus, the American solar industry achieved a record year in 2014 with a growth of 34% compared to 2013 for a capacity of more than 6,200 megawatts. Within these developments were led by the residential and utility segments (due to data from the Solar Energy Industry Association 2014). Reduced barriers to entry and a favorable political climate are helping to develop solar power across the country. Companies as well as public bodies recognize the advantages of solar capacity installed on their roofs. On the one hand, it helps power homes and stores that adopt it, but on the other hand, customers in remote locations can also access the renewable energy source.

One real example is the non-utility scale project of the 183rd Virginia National Guard Regiment which decided to complete a solar installation at its Regional Training Institute (RTI) in Fort Pickett, Virginia. The project, a $ 2.2 million, 488 kilowatt solar panel that measures 10,000 square meters and consists of nearly 2,000 individual solar panels, provides RTI with nearly 80 percent of its daytime energy needs. This field is estimated to produce 712,000 kilowatt hours per year and was installed adjacent to the RTI campus. The Lufft weather sensor provides wind speed, wind direction, temperature, humidity and atmospheric pressure. The weather station and pyranometer together provide weather and solar radiation data in the field which is then integrated into a Schneider Electric BAS (Building Automation System) and displayed on the customer’s energy management dashboard. Evergreen Solar was the field installer under the supervision of Schneider Electric. Lufft provided the weather sensor for the solar power plant data collection.

But not only are weather sensors equipped with pyranometers useful; wind sensors are also important to be used for photovoltaic installations. The V200A, for example, is a standard wind sensor for many solar power projects in California. Ultrasonic wind detection is now preferred, so it has become standard for many projects. Recently, Lufft USA completed a small 1 MW rooftop installation for the city hall building in Harlingen, Texas. It only supplies the building and its surroundings. For this, a WS501 was installed six feet above the grid to provide weather data and transfer it to the Schneider Electric control system. The meteorological data is compared to the production data of the project. It was also given to the utility as a report to measure the efficiency of the solar project based on the current solar radiation at a given time. A V200A is also used to inform about the actual wind situation (atmospheric pressure, wind direction, wind speed and virtual temperature).

Another project Lufft USA worked on involved a small date palm farm in Meca, California. The farm in this hot desert oasis was far from the power grid and required the solar power plant to significantly lower the price of electricity. The WS501 again provides weather data with information on solar radiation which provided reports to the California Independent Systems Operator (CAISO). The harsh environment is no match for the WS501.

What environmental issues will the next generation face?