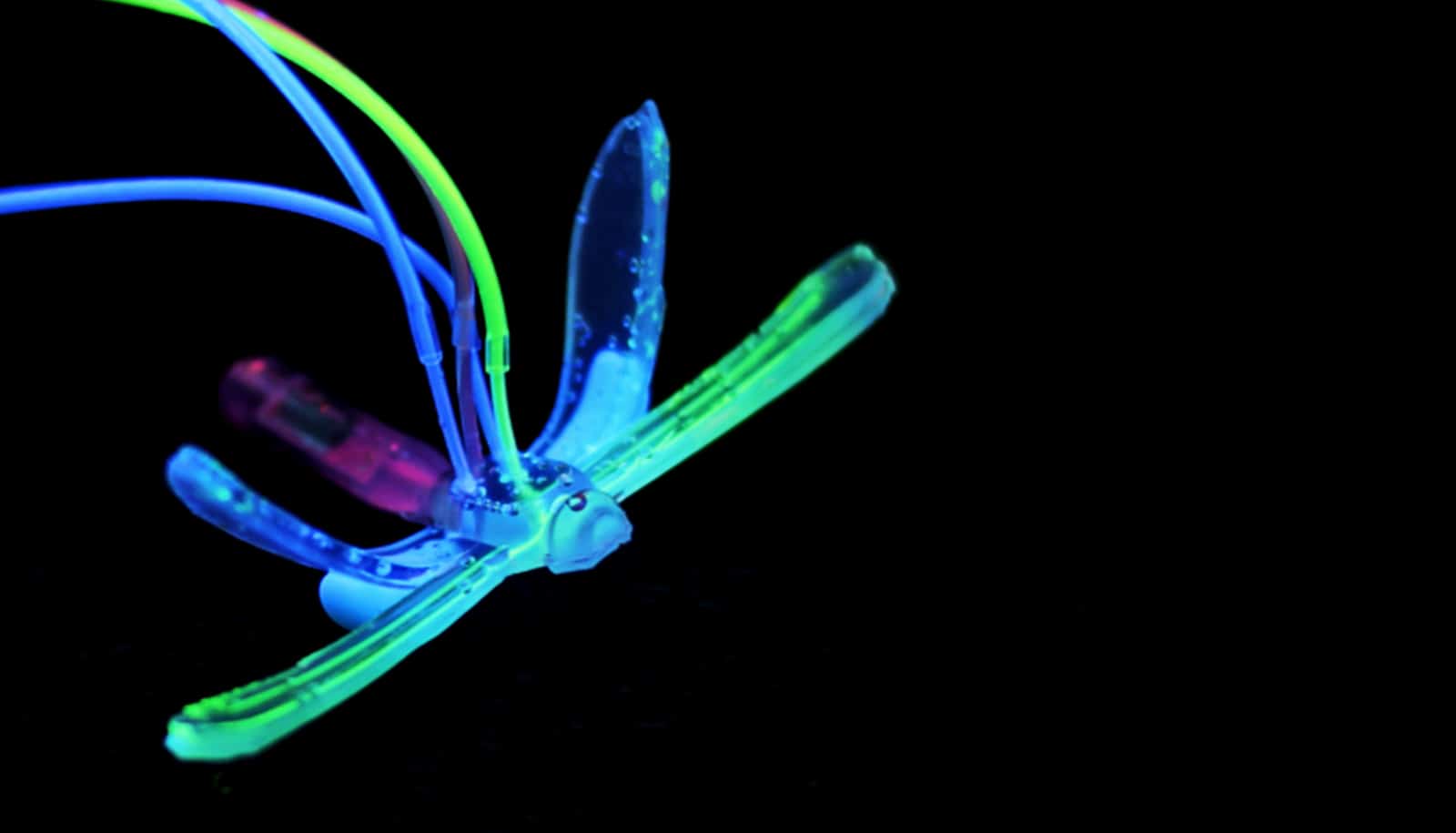 You are free to share this article under the Attribution 4.0 International license.

A fully flexible, electronic-free dragonfly-shaped robot can hover over water and react to environmental conditions such as pH, temperature, or the presence of oil.

The proof-of-principle demonstration could be the precursor to more advanced, autonomous, long-range environmental sentinels to monitor a wide range of potential tell-tale signs of trouble.

The soft robot is described in the newspaper Advanced intelligent systems.

Soft robots are a growing trend in the industry due to their versatility. Soft parts can handle delicate objects such as biological tissue that metallic or ceramic components would damage. Soft bodies can help robots float or squeeze into tight spaces where rigid frames would get stuck.

The expanding field was on the mind of Shyni Varghese, professor of biomedical engineering, mechanical engineering and materials science, and orthopedic surgery at Duke University, when inspiration struck.

“I got an email from Shyni at the airport saying she had an idea for a gentle robot that uses a self-healing hydrogel that her group has invented in the past to react and move around autonomously.” , explains Vardhman Kumar, doctoral student at Varghese. laboratory and first author of the article. â€œBut that was the extent of the email, and I didn’t hear from her for days. So the idea kind of sat in limbo for a little while until I had enough free time to pursue it, and Shyni said go for it.

In 2012, Varghese and his lab created a self-healing hydrogel that reacts to changes in pH within seconds. Whether it’s a crack in the hydrogel or two adjacent pieces “painted” with it, a change in acidity causes the hydrogel to form new bonds, which are completely reversible when the pH returns. at its original levels.

Varghese’s hastily written idea was to find a way to use this hydrogel on a flexible robot that could travel through water and point out places where the pH changes. With a few other innovations to signal changes in her environment, she figured her lab could design such a robot as a sort of autonomous environmental sensor.

With the help of Ung Hyun Ko, a postdoctoral fellow also in Varghese’s lab, Kumar began to design a flexible robot based on a fly. After several iterations, the pair settled on the shape of a dragonfly designed with a network of interior microchannels that allow it to be controlled with air pressure.

They created the body – about 2.25 inches long with a 1.4-inch wingspan – by pouring silicon into an aluminum mold and baking it. The team used soft lithography to create interior channels and connected with flexible silicone tubing.

â€œGetting DraBot to respond to air pressure commands over long distances using only auto-actuators without any electronics was difficult,â€ says Ko. â€œIt was definitely the hardest part.â€

DraBot works by controlling the pressure of air entering its wings. Microchannels transport air to the front fenders, where it escapes through a series of pointed holes directly into the rear fenders. If both rear fenders are down, the airflow is blocked and DraBot is not going anywhere. But if both wings are up, DraBot moves forward.

To add an element of control, the team also designed balloon actuators under each of the rear wings near DraBot’s body. When inflated, the balloons curl the wings upward. By changing the wings up or down, the researchers tell DraBot where to go.

â€œWe were happy to be able to control DraBot, but it’s based on living things,â€ says Kumar. “And living things don’t move on their own, they react to their environment.”

This is where the self-healing hydrogel comes in. By painting a set of wings with the hydrogel, the researchers were able to make DraBot reactive to changes in the pH of the surrounding water. If the water turns acidic, the front wing on one side merges with the rear wing. Instead of moving in a straight line as shown, the imbalance causes the robot to spin in a circle. Once the pH returns to a normal level, the hydrogel “does not heal”, the fused wings separate and DraBot becomes fully responsive to controls again.

To boost its environmental awareness, the researchers also used the sponges under the wings and doped the wings with temperature-sensitive materials. When DraBot hovers over the water with oil floating on the surface, the sponges absorb it and change color to the corresponding oil color. And when the water gets too hot, DraBot’s wings turn from red to yellow.

Researchers believe that these types of measurements could play an important role in an environmental robotic sensor in the future. Reactivity to pH can detect the acidification of freshwater, which is a serious environmental problem affecting several geologically sensitive regions. The ability to absorb oils makes these long distance skimming robots an ideal candidate for the early detection of oil spills. Color changes due to temperatures could help spot signs of a red tide and bleaching of coral reefs, leading to a decline in the population of aquatic life.

The team also sees many ways to improve their proof of concept. Wireless cameras or solid-state sensors could enhance DraBot’s capabilities. And creating some form of on-board thruster would help similar robots break free from their tubes.

â€œInstead of using air pressure to control the wings, I could consider using some kind of synthetic biology that generates energy,â€ says Varghese. â€œIt’s a whole different field than where I work, so we’ll have to have a conversation with potential collaborators to see what’s possible. But that’s part of the fun of working on an interdisciplinary project like this.

Researchers primarily performed this work at the Shared Materials and Instrumentation Facility (SMIF) at Duke University, a central facility supported by the National Science Foundation as part of the National Nanotechnology Coordinated Infrastructure (NNCI).