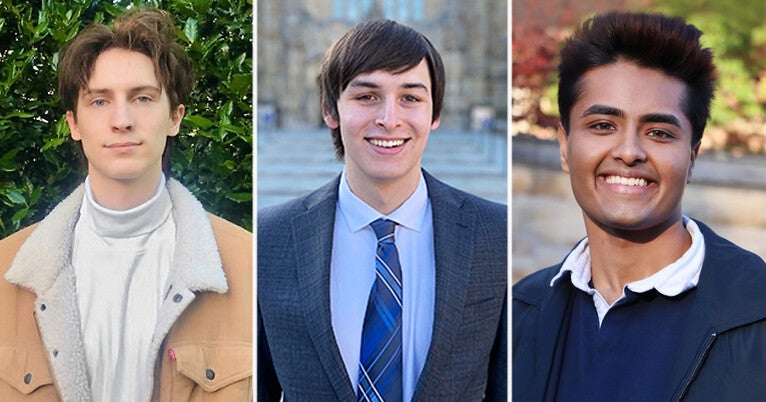 The Udall Foundation recognized three Yale undergraduates for their commitment to careers in tribal public policy, the environment, or Indigenous health care, as well as for their leadership potential and academic achievements.

Sophomore Joe Boland was named the 2021 Udall Fellow in the Tribal Public Policy category; junior Abey Philip received an honorable mention Udall Scholar in the environmental category; and junior John Crawford was selected as an intern for the 2021 Native American Congress.

Boland, a citizen of the Cherokee Nation (Absentee Shawnee), is one of 55 students from 42 colleges and universities selected as Udall Scholar. Fellows were chosen from 416 applicants nominated by their institutions across the United States. A history graduate, Boland serves as vice president of the Sophomore Class Council and is one of two senators from Ezra Stiles College on Yale College Council. Last summer, he interned at the Department of Justice’s Office of Tribal Justice as well as the Native American Youth Center at the Aspen Institute, where he produced reports on the effective management of hazardous waste in Native Communities of Alaska, analyzed Indian Country law, and researched to better understand key cases of federal Indian law.

Philip was among 55 American students who received an honorable mention Udall Scholar in the environmental category. He is interested in finding new and innovative ways to center the voices of marginalized communities in environmental policy decisions. At Yale, Philip led the creation of the $100,000 Student Green Innovation Fund, which supports student-submitted sustainability projects. This summer, he will work for the Natural Resources Defense Council as an environmental justice intern, advocating for low-income and communities of color in Southern California.

Crawford, a member of the Potawatomi community of Forest County, is one of five students, representing five tribes and five universities across the country, to serve as interns at the Native American Congress in 2021. The award is presented by the Udall Foundation and the Native Nations Institute at the University of Arizona. The 2021 summer program will be a nine-week virtual experience due to the COVID-19 pandemic. Interns will work virtually in the offices of Congress and federal agencies, where they will have the opportunity to research legislative issues important to tribal communities, gain an insider’s perspective on the federal government, and enhance their understanding of nation building and tribal self-reliance. Crawford is the first member of the Forest Potawatomi community to be selected as an Udall trainee. He is majoring in history and world affairs at Yale, where he is treasurer of the Association of Native Americans. He is interested in promoting aboriginal self-government and economic sovereignty.

The most important environmental factors among ESG: Poll