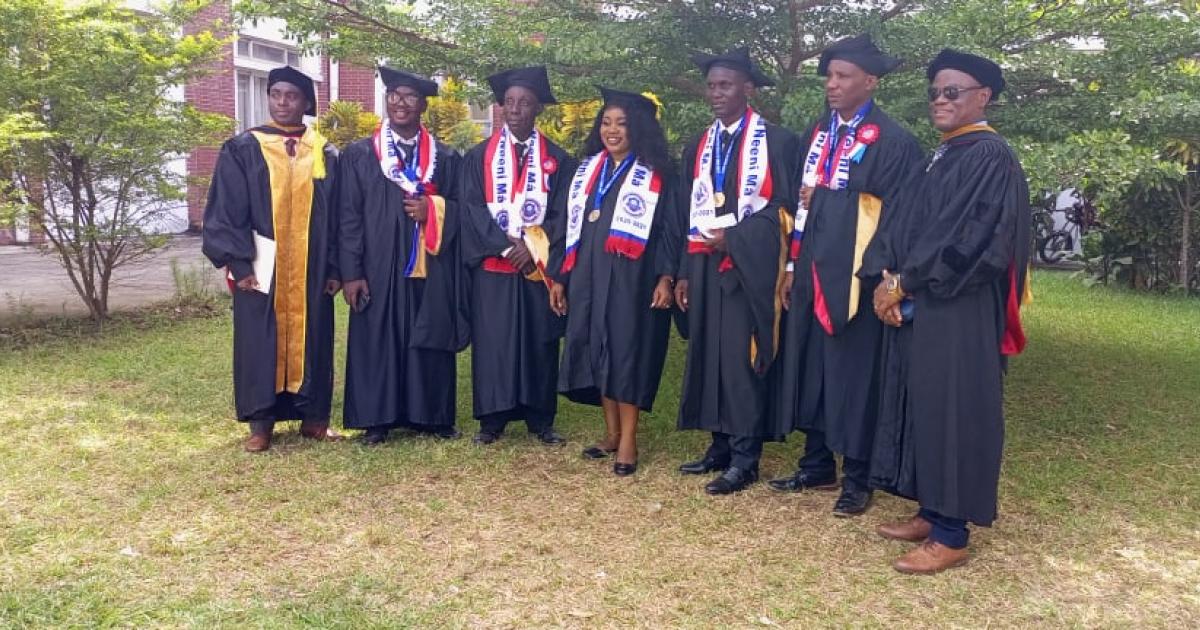 The University of Liberia has graduated its first batch of environmental science students as the country strives to reach its goal of net zero emissions by 2050.

The graduates, seven in all, now have the knowledge to meet the country’s research needs that would help address the current and future challenges of climate change. They are the first group of forty students who have enrolled in UL’s Environmental Studies and Climate Change (ESCC) degree programs.

“Today’s graduation is an important milestone. This is a clear manifestation of the level of work we have accomplished since the launch of the program in 2019,” said Dr. Charles Asumana, ESCC Graduate School Program Director. “We were given a task and I think we executed it well. This graduation exercise is the success story of our achievements.

CCHS programs, Dr. Asumana revealed, combine scientific knowledge with understanding of the economic and social impacts of climate change adaptation and vulnerability, waste and disaster management. ESCC courses, he said, place great emphasis on research and a better understanding of environmental disasters, climate change issues and biodiversity – to fill the gap in the growing demand for labor market into professionals familiar with the environmental issues in the country.

“We don’t only prepare our students for local markets, but also internationally,” Dr. Asumana said. “That’s why we have a world-class faculty. Almost all of the school’s instructors hold a terminal degree.

Inaugurated in 2019, the University of Liberia’s ESCC degree program offers undergraduate and graduate degree programs that support the United Nations Sustainable Development Goal on climate action. These professional programs not only grasp the issues of climate change, but also disaster management as a way to contribute significantly to addressing environmental issues in and around Liberia.

The UL initiative is supported by UNDP’s National Adaptation Plans (NAP) Project in partnership with the Environmental Protection Agency (EPA) and funded by the Green Climate Fund — offering a master’s degree in Environmental Science and Climate Change, a Master of Arts in Environmental Management, and a Bachelor of Environmental Studies.

The university’s new interdisciplinary Masters in Environmental Resource Science also focuses on water and soil, two of the world’s most critical resources, as well as waste management and other areas. The vision for the creation of the CCHS was crafted in 2018 by the EPA who shared it with other stakeholders. This resulted in the signing of a memorandum of understanding between the university and the UNDP.

Through the programs, the University of Liberia shall produce professionals whose qualifications, skills and competencies will meet the needs of the community, county, national and international.

“We have a huge plan to launch our Ph.D. very soon. we are working on the modalities with our partners to make sure this happens as soon as possible,” said assistant professor of physical chemistry/climate change, Dr. James McClain. “Our students are prepared for a career in which they study, characterize and manage the environment and resources responsibly and effectively.”

Meanwhile, class president F. Oliver Williyan noted that as first class, it is now up to him and his colleagues to put into practice everything they have learned over the years. He added that the journey was not easy as his tenacity led to very few candidates graduating. Williyan lamented how rigorous the program was, but that it prepared him and his colleagues for the tougher tasks ahead.

“It is now up to us to prove to the outside world that the CCHS is a place of excellence. Our studies have been challenging but rewarding,” he said.